I have a confession.. I have never (as far back as I can recall anyways) owned an a-line skirt. So when I received The Super Online Sewing Match – Round One project brief which was to create an a-line skirt, I had a slight case of panic! It’s one thing to be trying out a new pattern, but figuring out the nuances of a new silhouette to fit your body at the same is a totally different story. Luckily I like a challenge 🙂

My paper pattern drafting experience is pretty limited, I usually just figure things out as I go. Making a fully fitted skirt pattern in my own measurements was a great challenge for this first round! At the start of the competition we were given access to the Craftsy class Creating an A-Line Skirt from Deborah Moebes in order to learn all the drafting and construction skills we would need for this challenge. I found the platform easy to follow; the lessons were thorough, the videos professionally shot, and Deborah was a charming instructor. She makes sound effects, how can you not love her?

After doing an initial (or two) muslins based on the instructions, figuring out the dart size and placement, I proceeded to create my self-drafted pattern. I added in single welt pockets, which I’d never done before, a contrast panel on the bottom, and moved the zipper to the back. You can see my pattern pieces below!

Challenges: I had a big problem when I was drafting my pattern, and it’s possibly the reason why I don’t own any a-line skirts. Deborah instructed us to make the front and back of the skirt the same size, the only difference being the darts. I had a feeling this would be an issue right off the bat, but I went ahead and tried it anyways. *three patterns and a crying fit later* The cause of my pattern trouble was that I have what I like to call a negative butt. By that I mean there is basically nothing back there, so the back of my skirt needed to be quite a bit smaller than the front in order to make the side seams sit where they are supposed to and everything look proper. Two full inches smaller to be exact! Once I made that modification, life got much easier.

For fabric, I knew I wanted to work with something I already had. I’m a big advocate of sustainability and upcycling unwanted materials so I decided to harvest fabric from three button-down shirts I had been saving for a special project. Below you can see images of them, the purple ones are a cotton and cotton/poly blend, and the patterned one is a blend of some kind (content tag was missing).

By harvesting I mean that I didn’t use any of the original construction or seams. I broke them down purely in to usable pieces of fabric which I cut out my pattern on and the rest was saved for other projects, even the tiny scraps and thread. I like to use every little bit!

Taking advantage of the beautiful colors and pattern from the fabric was the main inspiration for my design, but I also wanted to created something functional which is why the pockets and the right length of the skirt were paramount.  This is my final skirt! It turned out I don’t really own clothing that works with this style of skirt, so the leopard top was the best I could do 🙂 The ridges parallel to the waistband, especially on the back, are from my top bunching up underneath and not the skirt construction itself. 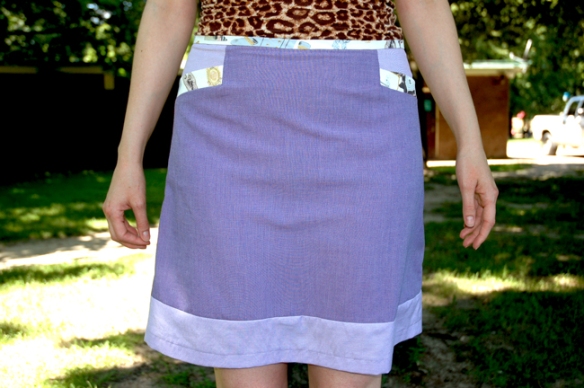 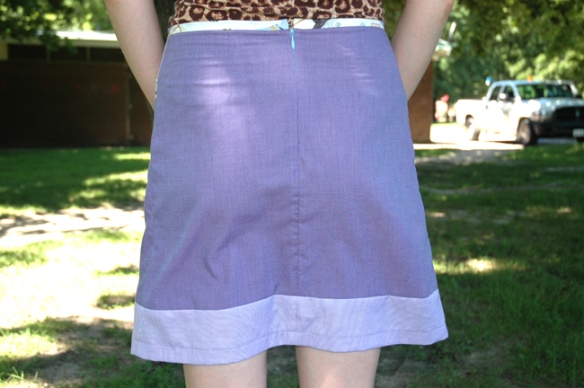 I created the waistband with double-fold bias tape which I made for the first time ever, using Colette’s super easy tutorial for bias tape as a guide. So excited to have learned how to do this! The fabric wasn’t the easiest to work with, but I was determined to have an extra pop of the pattern on the skirt. Instead of topstitching on the binding to finish, I “stitched in the ditch” at the seam where the binding and the skirt meet up.

I changed the zipper to center back because I thought there might be issues with bulk at the side seam from the welt pocket. I had access to limited zipper colors so I went with a light blue! I tried using my normal zipper foot like in the class video, but felt that it was making things more difficult so I gave in and bought an invisible zipper foot. It wasn’t expensive and definitely worth the purchase! I added a hook an eye closure to keep the top together as suggested in the class instructions. Note: there are tiny holes on the left from where the pocket on the button-down shirt originally was.

All my edges were serged to keep them from fraying once the skirt had been pieced together. Here you can see my ½” seam allowances pressed out with the serged edges. Because the fabric I used was second hand, the darker fabric in particular is more worn out (thinner) and looks a tiny bit wonky on the serged edges (only on the inside though!).

For the hem, I first finished the raw edge with my serger and then used my sewing machine to put in a blind hem. 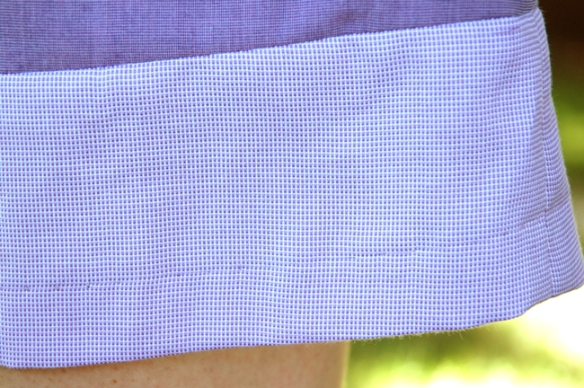 My version of the skirt has a single welt pocket which I worked in to the front darts. From the waistband, my pocket measures 8” deep and has a contrast pocket facing and bag, with a 1” contrast welt with fusible interfacing on the inside half. “It will be so fun and easy to make a welt pocket for the first time during a sewing contest!”- Said no one EVER. These are terrifying, especially being that I put it on a diagonal so I could work the dart in to the seam. I think they turned out pretty good considering, but I will be practicing a lot more before attempting to do them again. One wrong snip and your whole garment is ruined. Eek!

I also added a contrast panel to the bottom which you can see in the hem image. I was planning to use the patterned fabric, but it wasn’t wide enough and I wanted to avoid a patchwork nightmare so I opted to use the lighter purple cotton.

Overall, I think this skirt worked out pretty well! I’m still not sold on the a-line style just yet, but this project has definitely given me pause. I had such a fabulous time learning brand new techniques during this round, I really hope I can continue next week! Thank you to Sew Mama Sew, Janome, the amazing judges (I practically swooned when I saw who you all were!), and all the lovely sponsors. This is a grand adventure that I am honored to be a part of 🙂

If you have any questions or would just like to say hello, you can do so by using the CONTACT page on the menu above or by emailing : hello (at) ashleylotecki (dot) com 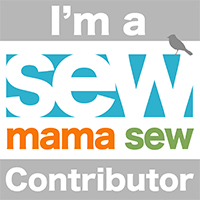 All rights reserved. All designs on this website are copyright of Ashley Lotecki unless otherwise stated. No images, graphics, or text on this site may be reproduced or distributed without written permission of the artist, Ashley Lotecki. If you would like to discuss licensing any designs please email hello (at) ashleylotecki (dot) com